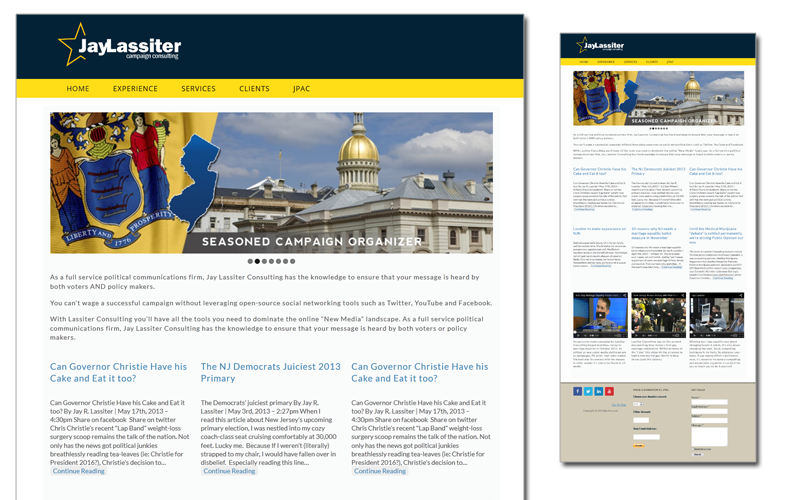 Overview
Jay Lassiter is a preeminent ‘NetRoots blogger and consultant in the New Jersey political arena. Jay needed identity and a web presence that would allow him to market his experience to political campaigns and issue-oriented organizations.

Strategy
Position Jay as a permanent fixture in an arena that is known for transience. Showcase Jay’s new media subject matter expertise, all while making him easily recognizable and credible as a political operative.

Execution
The logo illustrates his political roots and the site echoes the design of many campaign sites, so that the target audience will feel as though Jay speaks their language.

Overview The Child Nutrition Services of the Christina School District (CNS) conducts a summer feeding program for high-risk children in the Wilmington/Newark area of Delaware. CNS desired higher participation among its target audience. Strategy Position the Summer Feeding Program as a desired alternative to cooking at home and as a fun social gathering place for… END_OF_DOCUMENT_TOKEN_TO_BE_REPLACED

Overview Conjure Consulting is a start-up consulting firm that assists principals in the hospitality industry to improve business processes and market their facilities more effectively. Strategy Establish Conjure Consulting as an accessible and empathetic subject matter expert in the hospitality industry. Execution A vibrant color scheme was developed for the identity and for digital and… END_OF_DOCUMENT_TOKEN_TO_BE_REPLACED

Overview The League of Humane Voters is a political lobbying organization that seeks to enact legislation that protects animal rights and oppose laws that promote animal cruelty. Strategy Design marketing pieces that catch the eye of legislators and establish The League’s credibility through solid design to indicate their organization and dedication. Execution Using bold color,… END_OF_DOCUMENT_TOKEN_TO_BE_REPLACED

Overview Food Trends in NYC is a first-class caterer that wanted to raise its visibility in their office-rich neighborhood. They wanted a site to serve as a hard-working marketing tool, complementing their print marketing efforts. Strategy Position Food Trends as a world-class caterer with the skills to produce exciting cuisine…that you can have for lunch.… END_OF_DOCUMENT_TOKEN_TO_BE_REPLACED

Great article. I have had experiences like those of the author, and it has shaped me into the altruistic, cheerleading, accessible, psychoanalytical creative director that I am.

a little something interesting I found: http://ift.tt/1iHtdJV from LinkedIn via IFTTT

Book Review: About Face: The Secrets of Emotionally Effective Advertising by Dan Hill

I am an avid reader of design and advertising books. As geeky as it sounds, I read those types of books as my pleasure reading. I always want to know more about how to excel at my craft. Every so often there comes along a book that completely changes the way that I think about… END_OF_DOCUMENT_TOKEN_TO_BE_REPLACED

Part of my goings-on about the user experience include knowing your audience and understanding what makes them tick. A huge part of the behavioral information that you can glean about a particular audience segment is culture. I came across an article on Business Insider that represents visually how cultures around the world negotiate. Why should… END_OF_DOCUMENT_TOKEN_TO_BE_REPLACED